My wife & I have been returning to my parents house for Thanksgiving every year since we graduated college. Customarily, people stop schlepping home to exploit the free labor of their parents' holiday cheer around the time they have kids—but for a growing number of millennials who aren't interested in bringing children into the world, this presents a dilemma: do I expect my mom to cook me turkeys until she is physically unable?

Longer answer: this year in particular, having logged over 25 weeks traveling, I was eager to stay home for the holidays for once. I still wanted a traditionally large and wasteful Thanksgiving feast, but I just didn't have it in me to drive three hours for one.

This raised another dilemma: if I'm too lazy to drive for free food, who's going to make it for me at my house? Answer: Whole Foods, apparently!

See, it's common knowledge that millennials don't cook. We need venture-backed startups to subsidize delivered meals for us. Why pay more money for food I have to figure out how to make on my own?

Today, too, I wanted to get something for nothing (in keeping with the true spirit of the holiday), so I was pretty jazzed when I learned that I could stroll up to a Whole Foods customer service representative and place an order for an "oven-ready" dressed turkey and a bevvy of pre-cooked accompaniments.

Whole Foods starts taking orders on November 1st, I was told. I think. Nothing seems to be documented anywhere on the web, which may explain why this program seems to be so sparsely known. So, reluctantly, I drove into the store to place an offline order in person, just like in the forgotten days of the American frontier.

A temporary holiday desk had been set up, and I grabbed the attendant's attention. I didn't hesitate to interrupt her lunch so that I could endlessly fuss about and ruminate out loud about my meal to her, albeit three weeks hence.

After investing 20 minutes in a painful reconciliation process between Whole Foods' printed "menu"—which lacked any prices—and the actual software catalog on the representative's laptop, I received this confirmation: 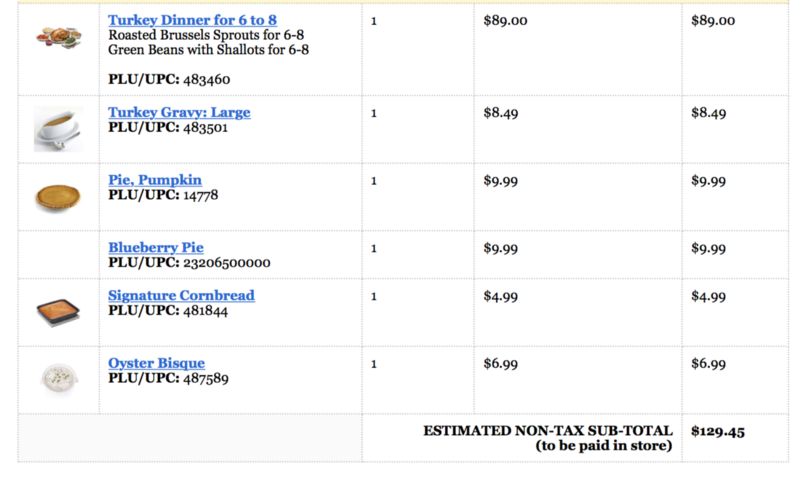 The customer service representative confirmed that this deal did sound too-good-to-be-true. However, she was a bit uncomfortable ruling definitively on whether the meal would be exempt from sales-tax, as it was categorized as a grocery item, but marketed as "prepared". Her deft ability to sidestep such a simple question tells me that she's going make a great accountant someday.

I showed up at the store at 10:15 on Thanksgiving morning. The place was packed, the employees harried. I don't think I saw a single woman customer. Perhaps this was the step in the all-day feasting process most likely to be delegated to men in the family. Or maybe men are more likely to favor the idea of consuming-but-not-preparing a Thanksgiving dinner. In either case, I got in line and waited.

I'll be honest, the ordeal necessary to pick up one box and three bags of food was pure chaos. Employees were arguing with each other—about what was included with what meal, about what kind of bird was in which box, over whether each item was "organic" or (I presume) inorganic. At one point, someone took my turkey away, replacing it, only to realize she'd been mistaken and confirmed that the original turkey was indeed mine. Although I could detect my blood pressure rising sympathetically, it made me glad that the worker had been mistaken, because I'd already named the turkey Dylan, and we had a big day planned.

So I just stood there and waited for the dust to settle before taking a very careful inventory. I could confirm that I had all the right foods, but the proportions seemed odd. Do I need two casserole dishes of stuffing but only one small container of mashed potatoes? Was that right? Who's to say? The entire experience was anxiety-inducing.

As I unpacked everything, it dawned on me that I'd just amassed 25 pounds of what basically amounted to cold takeout food at 10am on a Thursday:

See the bow around the turkey? Little touches.

Upon reading the provided cooking & reheating instructions, I realized the trick to all of this would be to focus first on getting the turkey cooked, then in prepping the remaining items to be reheated simultaneously.

I started by hastily throwing the bird in the oven on a cookie sheet: 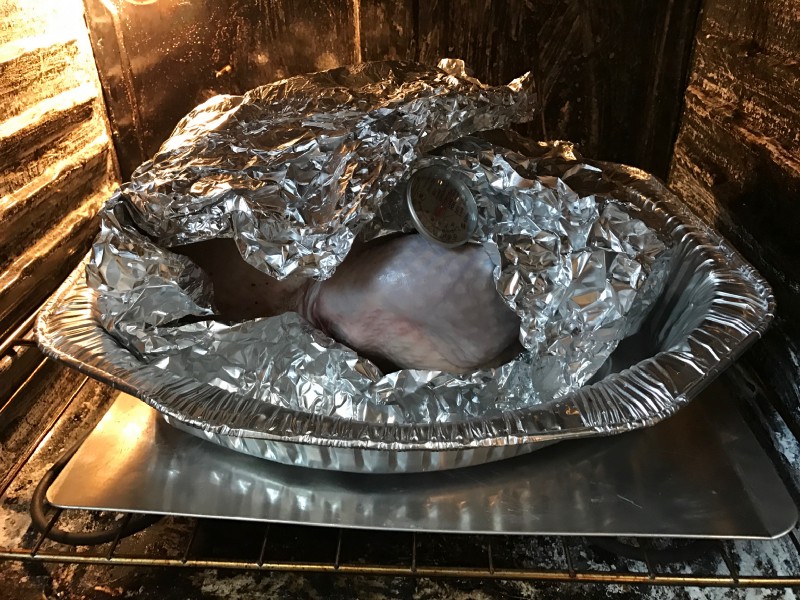 Not pictured: my excitement for getting to use my meat thermometer for the first and only time ever.

Next, I prepped the rest of the food so it would be ready to be reheated on the stovetop & the oven the instant that the turkey hit 165°:

Why'd I buy oyster bisque? Is that a thing people in New England eat at Thanksgiving or something?

Now, all I had to do was wait.

Wow, waiting is awful. No wonder millennials don't cook. Am I just supposed to sit in front of the oven on my phone or something? Man, I really picked an awful month to quit listening to podcasts and reading news.

Real talk: I still have no idea if any of this food is any good. I'm still waiting. Turkeys take forever. [Update: we ate the food! It was good!]

So, to pass the time, I decided to sit here and write this on my laptop while staring at the oven, wishing for Dylan to just finish up already.

And lo! The turkey is almost ready, so I guess I'll stop writing now.

Should you do this?

If you were ever going to skip a family Thanksgiving political discussion, 2016 was the year to do it. I say enjoy an apolitical Thanksgiving with your extended family next year, but recommend you place a provisional Whole Foods order for November 2018, depending on how the Senate map looks. (Besides, it's no-money-down—why not!)

Oh, one last thing, anyone know what I'm suppoesd to do with Dylan's giblets?